The end of our month long adventure through Thailand was bittersweet. Bitter because we’d had such a good time we didn’t want to leave, sweet because we were pretty stoked to be heading to the second country of our trip, Laos. We knew before we left home that we definitely wanted to do the two day slow boat into Laos, so we’d planned to round out our Thailand stay in Chiang Rai in the country’s north, making it easy to get to the Thai – Laos border crossing in Houy-Xai, and from here catch the slow boat south to Luang Prabang. 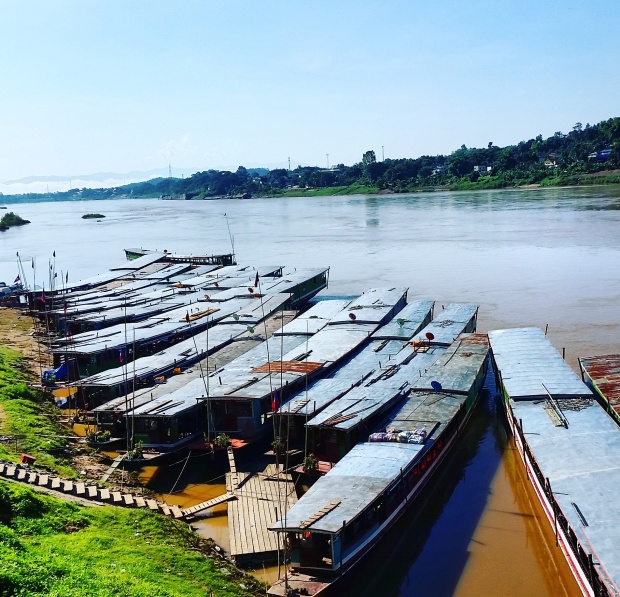 Slow boats at the ready

Before we left we read loads of blog posts and reviews about the slow boat experience. Some offered dire warnings, many offered conflicting information and the degree between the good and truly awful were vast. We were prepared for the worst but hoping for the best. Honestly though, we couldn’t have had a more chilled trip down the Mekong. The whole process was easy and the experience of cruising the Mekong for two days was so unforgettable I’m going to go ahead and call it a must do. 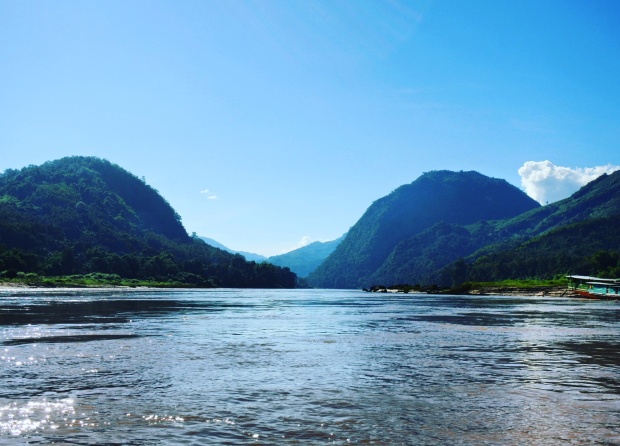 First thing first. You can pay someone to arrange your entire slow boat experience for you. We saw tour operatorators offering slow boat packages out of Chiang Mai, Pai and Chiang Rai. If you want to let someone else do the work you can, it’ll be more expensive but if you’re the kind of person who prefers to have things organised and you’re not too worried about the $, this option will allow you to do nothing much except show up. We decided to go it alone. Our philosophy is that half the fun of travelling is the journey, plus we’re on the road for a while so saving those $ where ever we can helps extend our travels.

The first leg of our trip was to actually get from Chiang Rai to the border town of Chiang Kong/Huay-Xai. After all the horror stories online we decided to do the border crossing the day before catching the slow boat allowing us plenty of time to figure things out and since we’re never overly organised, account for any stuff ups along the way. #eventplannergoesrogueplansnothing

We stayed at a guesthouse run by possibly the most nicest and most helpful guy in Thailand who advised us to take one of the cheaper local buses. The local buses leave every hour and cost just 65BHT, you can pay on the bus and don’t need to book in advance. We took his word for it, packed our backpacks and walked to the old bus station. We arrived at the bus station and saw a bus with a sign to Chiang Khong, paid our 65BHT and we were on our way, easy as that. You do need to set your expectations up front, it’s far from a luxury ride. It’s a dusty old bus with no aircon so the windows and doors are thrown wide open the entire trip. The fresh air and breeze cool you while you get lost in the rolling mountains and small villages along the way. They stop along the way to drop off and pick up locals and might even stop to let someone run into the bushes for a pee #BYOtoiletpaper. The whole trip took 2 hours and made for a colourful, pleasant and authentic experience. If your opting for total comfort though and want to pay around 240BHT you can book an air-conditioned bus. 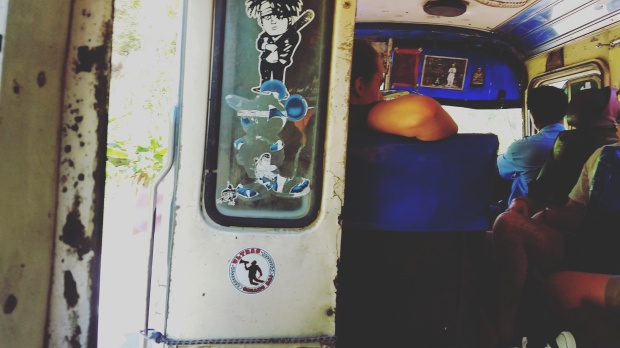 Tip – The bus is scheduled to go to Chiang Kong but you will want to go to the Thai Immigration which is a few kilometres away. The bus operators are well aware of this and will offer you to pay an extra 35BHT to be dropped off at Immigration so the total trip will cost 100BHT.

Going through immigration at a land crossing is generally less painful and more relaxed than at airports around South east Asia. Exiting Thai immigration took about five minutes. It was a pretty slow day at the border, so much so that the guy at the customs booth was having a little nap! After we made a few discrete noises he woke with a big grin, we all had a chuckle, then he took our passport for the exit stamp and just like that we were through Thai Immigration.

Tip- When you get to Laos Immigration you will need to pay the visa in USD, you can pay in Thai Baht but they will charge you more. The Thai Immigration Officer said he was giving us a deal and we exchanged 2400BHT for 60USD which he pulled out of his top pocket. We knew we weren’t getting a good deal but didn’t have any USD and I guess he needs to earn his weekend overtime somehow.

Once through Thai Immigration you’ll need to get a ticket for the shuttle bus to take you across the border to the Laos immigration, the shuttle bus is 25BHT pp and you can also exchange Baht for Kip. Being unorganised we didn’t have any kip so once again took a ‘good’ deal to exchange our left over Baht to Kip. We waited for about 10 mins and then boarded the bus for the 2 min ride over the bridge to Laos Immigration. 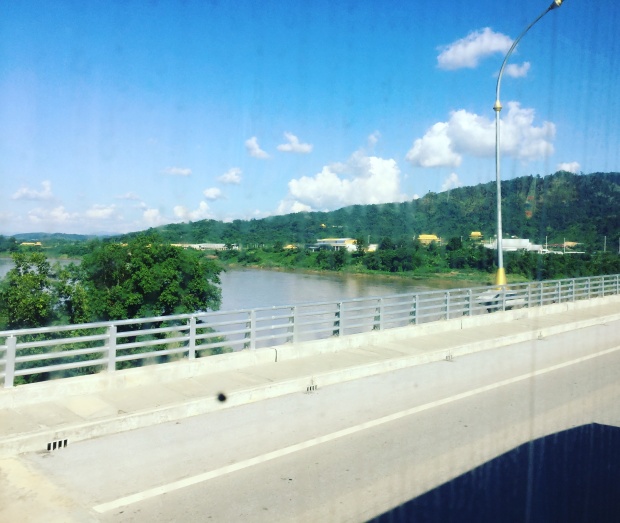 a bridge between two nations literally. That’s Laos to the right and Thailand on your left

We hadn’t organised a visa previously so we went straight to the Visa on arrival office where you simply fill in two forms and hand them over with your passport. After a 10 minute wait we were called over to collect our passports and pay the 30USD visa fee. The fees seemed slightly different for each country but it’s 30USD for Aussies. We also got hit up for a 10,000 Kip weekend overtime fee. We don’t know if this is really legit but after reading horror stories of travellers made to pay exorbitant ádmin’ fees we were cool with paying $1USD extra! The staff were very friendly and were joking around trying to pronounce English names. Ironically they’re ok with Estelle but struggle with Shane, he’s known as Shine in Laos. Passports in hand, we headed through customs for another stamp and that was that. We weren’t asked any questions, our bags weren’t checked and we didn’t walk through any metal detectors. It was very laid back, quick and painless. 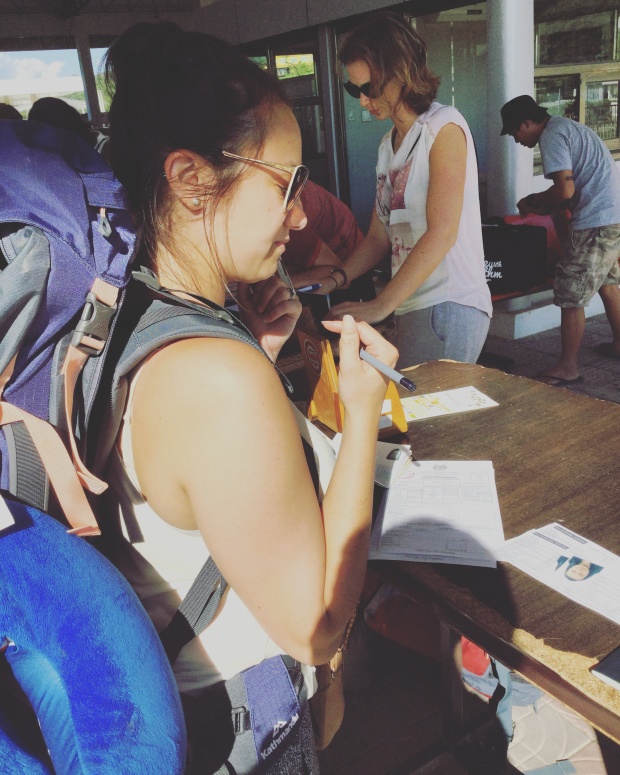 doing all the paperwork and looking very happy about it

We were now in Houy-Xai, Laos! Houy-Xai is the border town on the Laos side of the river, it’s about a 15 mins drive from the immigration office so you’ll need to jump in a Songthaw, there’s always one around though and they’ll charge you anywhere from 60 – 100k kip depending on how good your negotiating skills are.

We booked our ticket for the slow boat the day prior. We did this through our guesthouse for 240k Kip which included a tuk tuk to the pier. You can easily walk down to the pier and do it yourself and the price for the boat alone will be 220k Kip. The tickets had a seat number so the earlier you book the closer to the front you’ll be. Ideally you want to be closer to the front than the back. The back is noisy with the motor and busy with people walking back and forth for the toilets and bar. There are a few places at the pier where you board which offer a decent breakfast and lots of shops to buy drinks and snacks. Food and drinks are pricey and limited on the boat so definitely try to bring your own. 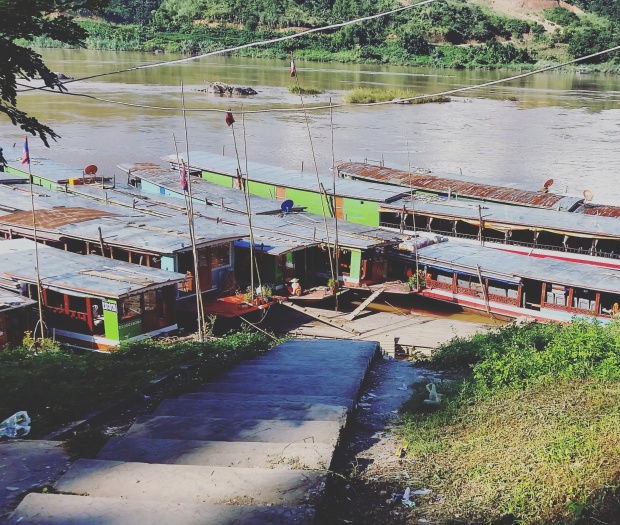 Tip- Once everyone is on board a guy will stand up and say something along the lines of ‘there’s so many people and not enough rooms in Pakbeng! If you don’t have a room I will give you a room for special price 120k kip’. Don’t fall for this. Pakbeng is full of guesthouses catering to the slow boat, they will not run out of rooms. When you arrive loads of locals will be waiting at the pier trying to sell rooms in their guesthouse again at inflated prices, but just walk up the hill a bit and you can take a look and find one much cheaper. We found a perfectly decent one for 60k Kip and about 7 other people who hadn’t booked anything also got rooms here, trust us, there are plenty!

All up we cruised on day one for about 5 ½ hours until we reached Pakbeng where we stopped for the night. We were up and on the boat again by 9am for day two and spent about 6 ½ hours floating our way into Luang Prabang. The scenery is equally impressive the entire way and Davis’ only complaint was that there were no fishing rods (I did not mind this at all). 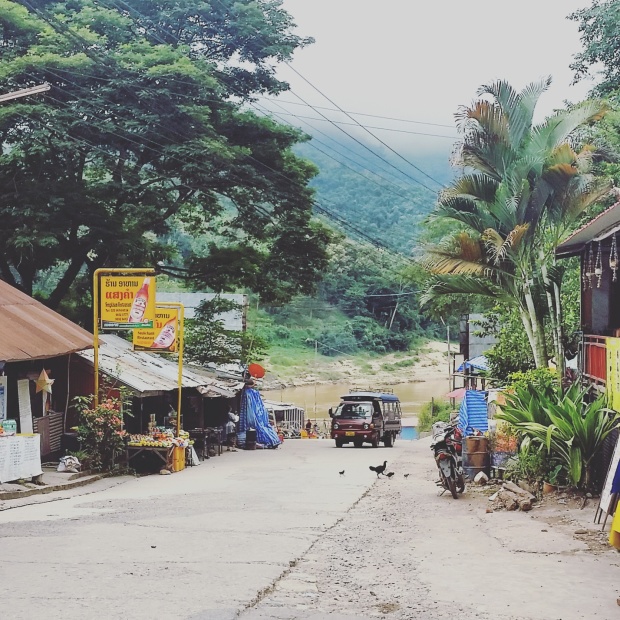 Tip- On day two we arrived at the pier at 8:45am for a 9am departure. #rookiemistake. We were almost the last to arrive and consequently had to sit at the back of the boat. Your seat number does not carry over to the second day, it’s a free, for all we didn’t mind too much but be aware that it is first in best dressed so don’t sleep in and insist you need a coffee, instead arrive early if you want a good seat. #stellasnotamorningperson 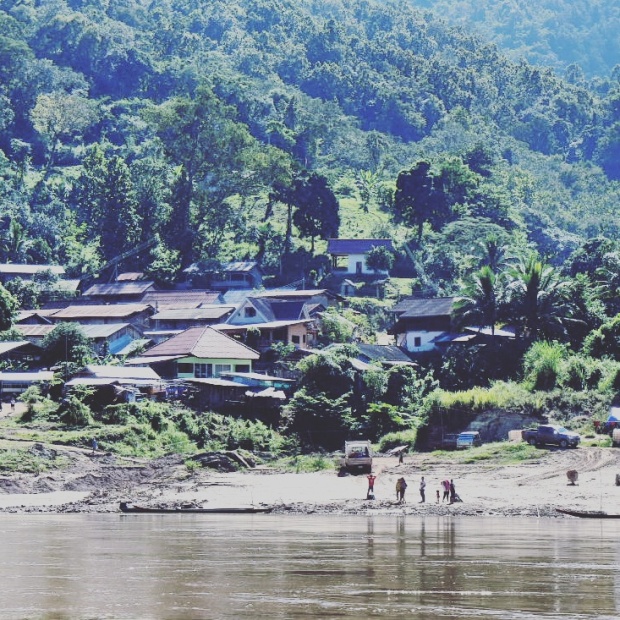 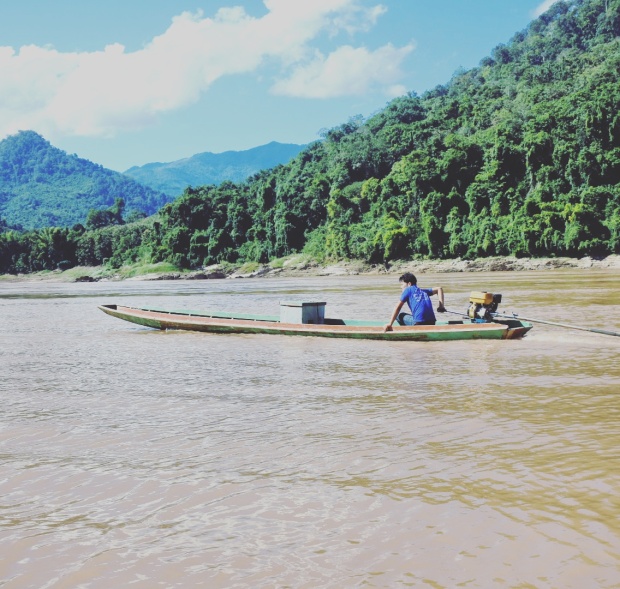 The boat arrives at Luang Prabang at a pier a little out of town and you will have to pay 20k kip for a tuk-tuk which drops you in the centre of town, there’s no point bartering with these drivers, unless you want to walk you just pay the 20k kip, realistically it’s only about $3 AUD. Side note- our driver tried to drop us off god knows where but luckily we had a young couple with us who knew the area and argued with him until he took us somewhere a little more central, we found this was a pretty common occurrence in Laos, so be prepared to stand your ground and ensure the driver takes you to where you want to go.

Overall the slow boat was an amazing way to not only get to Luang Prabang but to see Laos. To see the way that people live on and depend on the river for their livelihood. From washing, bathing and cooking to fishing and transport, we saw that the Mekong really is the lifeline of Laos for so many. I’ll admit that I was a little worried about spending two whole days on a boat, but I loved the lazy trawl of cruising down the Mekong, reading a book, sipping a beer and just taking some time out to really appreciate what’s around you – because I don’t know about you but I certainly don’t do that enough. 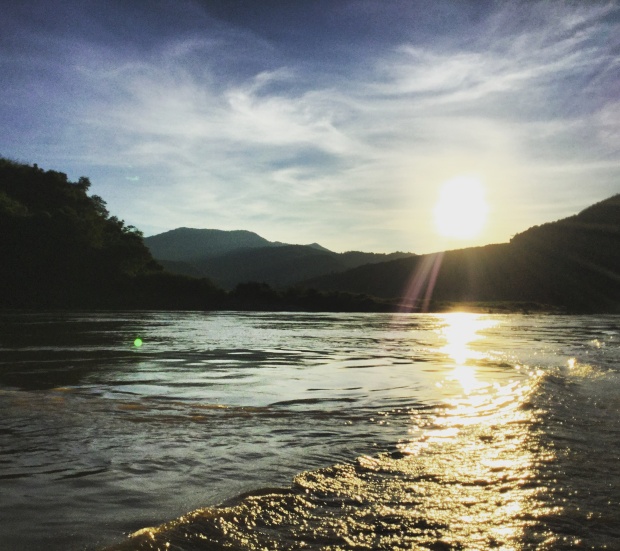