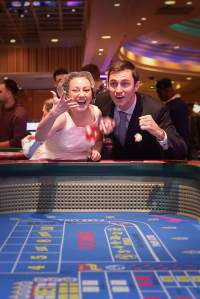 So you’ve decided to get married in Vegas- congratulations!

After the initial excitement you’ll probably find yourself trying to figure out the in’s and out’s of a Vegas wedding and coming up with more questions than answers, but don’t worry we’ve got you covered. From a couple who’ve been there here a few tips and things we found out along the way to help you with your plans.

So if you’re married in Vegas are you married everywhere?!

Umm yes. Contrary to what goes on in the movies, Vegas weddings are real and they are legal. You don’t have to have another ceremony when you get home to make it real and in our case we didn’t even have to register the marriage once we were back in Australia. This was true for us and we know it is for some other countries, but as always we suggest double checking the requirements in your home country to be sure.

I heard I need to be in Vegas for a week before we can get married is that true?

Nope. You don’t have to be in Las Vegas or even in the US for a set period of time before saying you’re I do’s. You will both have to go to a Clark County Marriage Bureau and get your marriage licence, but if you really wanted to you could do this in the morning and get married in the afternoon! There’s no blood tests involved you both just have to 18 years old, show your passport and not be closely related – this is actually stipulated on the website… whaaat?! Your marriage licence will set you back USD $77 and is valid for 12 months. You can save time by filling in the form online here up to 60 days before you go in.

You have to be married by Elvis

Elvis has left the building. We did not get married by an Elvis impersonator, it wasn’t our thing and my only throw back to that era was my vintage inspired dress. If you do want the King to preside over your nuptials though you’re in the right place, there are literally hundreds of venue options with many offering Elvis to officiate, walk you down the aisle or even serenade you.

We chose A Little White Wedding Chapel, mostly because it was the one where Ross married Rachael #sorrynotsorry. At this chapel you can even  get married in a Pink Cadillac in a drive through titled the ‘Tunnel of Love’ – I couldn’t make this stuff up.

Spend a bit of extra cash on a photographer 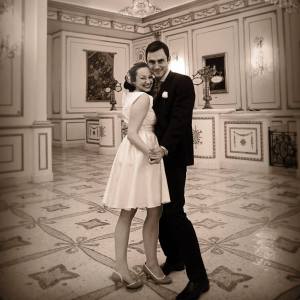 Sure the chapel we booked had a ‘photo package’ but that was just for pics at the chapel and during the ceremony. But we really wanted to capture a few of those ‘vegas-esque’ shots so we decided to hire a local photographer. This was the best decision of our whole wedding. We hired a stretch hummer, bought some drinks and bundled up our mates and awesome photographer Todd who took charge and directed the driver where to go so we could get the pics we were after, def worth the $.

How do you find a good photographer? Hairdresser? Make-up?

Weddings are a big business in Vegas so naturally there are a million suppliers that cater to the wedding market. I found my photographer, hair and make-up people on Instagram after searching a few hashtags such as #vegaswedding. We booked all our suppliers via email and while deposits were asked for up front the bulk of payments were made on the day making us feel more secure if something did go wrong. In the end we booked an amazing  photographer, make-up artist and hairdresser. One caveat – make sure you look up tipping etiquette for the types of services you’re booking, I had no idea you were meant to tip people like photographers etc but that’s the states for you!

Once it’s all over how do I get official documents?

If you get married overseas you’ll need proof of it when you get back home for official purposes like if you want to change your name. You’ll get a commemorative certificate at the chapel once you say I do but for the official docs you’ll need to order a certified copy of your marriage certificate online from Clark County Nevada. It costs about USD $15 and they post it to you in a few weeks, all in all it’s a pretty stress free process and you get a marriage certificate from  the State of Nevada which is pretty awesome.